Using my Laughs, tears, cheese and cheers rating system, here is my spoiler-free review for the locally made (to me), internationally distributed ‘How Not To Work and Claim Benefits (and other useful information for wasters)’, with links below if you want to find out more. 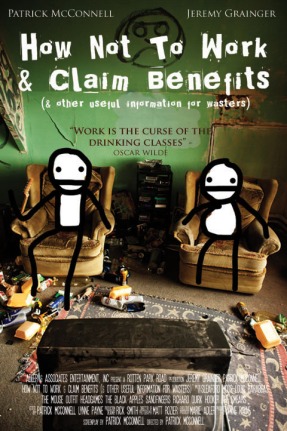 (Not so) Quick Summary

‘How Not To Work & Claim Benefits…’ is an ambitious production that punches well above its weight in terms of production values and quality, and mixes kitchen-sink, psychological, comedy and moral themes into the tale of two down-and-out wasters gifted £10,000 from a mysterious benefactor.

This is a departure from my usual diet of big-budget, Hollywood-centric cinema movies, as I finally get to watch an independent movie that I’ve seen steadily come to fruition via social network contacts who were directly involved in the production. However, most of these contacts are at least once or twice removed, friends-of-friends type people, so I feel I can still offer up a fairly, none-biased review, all be it tempered for the barriers inherent in a production of this scale compared to mainstream blockbusters.

With that said, having secured an impressive distribution deal on Amazon prime (links below), as a patron of said service I sat and watched this as I would any other movie, so I thought I’d put it though my same review-system mill and see what comes out.

The film rotates around the central relationship between Mike and Dave (or is that Dave and Mike?), sharing a crumby flat together and wasting away their days with alcohol, drug and benefits fuelled high jinks and adventures. The banter between them works better as the film progresses and you almost watch the pair relax into the roles for certain scenes.

There are some well-placed comedy characters scattered across the supporting cast that lift certain long scenes that risked being too functional without the light relief.

Not every joke landed with me, but they rarely do in any scale of production and none felt too contrived or fell disastrously flat.

Without spoiling anything, there is a very serious side to the plot that we are introduced to early on with flashbacks, dealing with bullying and the victims of harassment. It’s hard-hitting and a little hard to watch, but only because it rings true. However, the pay-off for this traumatic back-story is unfortunately lost a little in a third act that falls into heavy, dialogue driven revelation rather than finding a way to show the impact we are obviously meant to feel, otherwise I would have scored it higher.

For the uninitiated, the ‘cheese’ category is minus points for when film-makers commit the sins of lazy, clichéd dialogue, edits or action that they should really know better to avoid. Although there may be some moments in this film that don’t achieve the laughs or emotional impact I think they were after, it feels like the result of lack of time and resources and therefore hard compromises. If a major studio tests a scene and it’s not working, they will often re-shoot, re-edit, do pick-ups or what not. I doubt those options were readily available here, so I am letting them off any deductions!

Scoring on my ‘cheers’ category doesn’t necessarily mean a fist-pumping, feel good ending. What I look for here is a satisfying moment or conclusion that makes me feel rewarded as a viewer, even if it is dark or melancholy.

There is a noticeable lurch to the finish line with this film that I think it suffers from. In all constructive honesty, I found the last third of the film a bit slow and overly reliant on excessive revelatory dialogue. As I said before, I would have liked to have been shown more of this, in a more interesting way.

As a novelist, I know that endings are the hardest thing to get right, and I wouldn’t claim to have nailed this myself yet (please still buy my books). It felt like either the script or the cut needed a pretty ruthless edit or re-think, and possibly production time to do this got away from them. It felt like a good 15 minutes could have been cut, and the film would have worked better. Don’t get me wrong though, the idea of the ending (and film in general) is a good one, worth telling.

However, as it was a good idea I’ve given it a point, as plenty of films don’t have the idea or get the pacing right.

It’s rare for none-horror films to score here, so nothing out of the ordinary with this category.

The work and passion that went into making this film and getting it to market must have been astronomical. In this area (Staffordshire. UK), a lot of our creative industries are reliant on service-industry style work (weddings/music videos), and I know that good intentions to create original work often fall by the wayside when there are bills to pay. I deal with this by working a ‘normal’ job and making little to no money from my books, but all I need to do that is a computer and some self-discipline. Getting a project like this past the finishing line is a major achievement and my congratulations goes out to all involved. Well done.

Agree / Disagree with my assessment? Leave a comment to let me know or submit your own scores for this or any other film listed in the leader board below to be aggregated into the ‘readers choice’ table on the main rating page.

And if you enjoy my reviews, please like/share this page link, and consider taking a look at my original science fiction books advertised in the side bar! Thanks for reading.