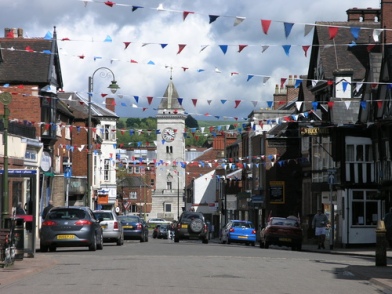 It’s a funny thing, given the upcoming election and the myriad reasons to get angry at the way things are during a time of potential change, the one thing that has really angered me this week, enough to write a blog about it, is the self satisfied Facebook announcement from a certain Conservative town councillor that the beautiful, market town of Leek, with it’s progressive drive for localism and independence, is going to get a McDonalds.

I’m not going to name the person, but as the comment was posted on a public forum, here is the wording (truncated):

“Well the news as (sic) broken! McDonalds have just publicly confirmed they are coming to Leek. This is something that the Staffordshire Moorlands District Council have been working on for over 12 months now and it’s just another success story for this Conservative led Council…”

Whoopsy-freaking-doo. The picturesque, historic town is going to get a garish red and yellow cheap meat house to provide that much awaited backdrop of discarded packaging, low paid jobs and totally unbalanced competition for the local trades. Add to that a smattering of mal nutrition, obesity, and hmmm, this is a tasty burger!

Interestingly, however, the following article does make it sound like the junk food lovin’ Tory might have jumped the gun a little, as it sounds like the clown faced spokesperson for the golden arches of liver damage is not so sure yet:

““We are looking at several potential opportunities in the area but currently have no confirmed plans.” – Source: http://staffslive.co.uk/2015/03/mcdonalds-confirms-interest-new-leek-restaurant/

That said, who truly knows what has been agreed and confirmed behind doors with the Tory-led council, certainly not the local electorate from the sound of it.

So why so angry? I don’t live in Leek anymore, even though I visit almost every week, and I have on occasion (to my shame), eaten a McDonald’s. That said, I can count on one hand the number I’ve had over the last five years, and it has usually been down to some catastrophic error of time and food management.

Because that’s what it is, isn’t it? Lazy food. Lazy, cheap food laced with enough salt and sugar to trick you into thinking something good is happening at the time of consumption, when you know (usually within an hour) that something good really, really wasn’t happening.

Actually, yeah, those are the reasons I don’t like it. I now live in Stoke on Trent, and I have at last three McDonald’s within fifteen minutes of my house. I know what they look like, they’re everywhere, that is until I take a nice drive into the Staffordshire Moorlands. The buildings thin out, the fields and tree’s stretch out, and there, on a hillside as I approach, I see the Leek skyline and I know that there is something different, something unique, something I won’t find anywhere else waiting for me at the end of the road.

I’m not against every chain-store, for the record, I think the introduction of Waitrose into a building that was already being used as  a supermarket and the Premier Inn were good ideas. Tourism makes sense, and Waitrose has a profile that makes the area more desirable and encourages footfall. But when was the last time you visited a town because it had a McDonald’s? Rather than just passing one on the motorway or some grey business park and conceding that it is probably the only viable option save for eating your own hands?

So they’re not coming to town to bring more people in, to get them spending in the local shops. They’re going to do the opposite. The more bland and multi-chain commercialised the town gets, the less people are going to visit it, and the less independent businesses are going to remain open, and one will feed into the other in a downward spiral until the gateway to the peak district is rotting in obscurity under golden arches.

I know from experience that there will be people rejoicing this announcement. I can’t do anything about that. There are people who would be happy if the Library was ripped out and replaced with a car park, but that’s why those of us who are bothered about these things need to keep on being bothered. This is a town that now has a food-bank, and Tory councillors are spending twelve months ‘negotiating’ with one of the richest brands in the world to allow them to come in and take business away from local people. Maybe that time could have been better spent elsewhere? Rate reliefs (or cessation) on empty shop units to encourage new local businesses perhaps?

This represent more than just a tacky food store in an unsuitable location, it represent the whole ethos of the Conservative party, and any other mainstream party who put the greedy world of global capitalism on a pedestal and placates us with false promises of ‘trickle down’ economics while cutting our society back to the bone and beyond.

So anyway, discuss, debate. Someone’s got to, because we can’t be leaving it to these clowns (literally, in this case).