It is finally here…

As you can see in the lovely sidebar to your right (or by scrolling down if you are on a tablet or phone) – my new book ‘The Great Connection: Worlds in Waiting’ is now available to buy in hard back and eBook format! Please click on the link below or the picture of the cover to find out more!

The funny thing about writing and releasing a book, is just how much time it takes.

First of all you need an idea. Luckily I have lots of them rattling around and keeping me up at night, but that means you then have to figure out which idea is the one to work on.

I spent the first six months after the release of my last book (The Dimension Scales and Other Stories), working on an idea that was not the right one… I got 30,000 words into a draft before calling it a day on a manuscript that wasn’t going anywhere, fast… The last line I wrote before giving up was:

“Okay, so that might just do it. For now. At least until I know what’s happening.”

Just to be clear, that was me speaking, not a character…

I had made the error of setting off without a map. Even my short stories have a map before I start writing – usually a bullet point list of plot points and chapter arcs. And this time I was writing a novel, a whole 80,000 words+ of unified story! I needed a map, and was back to needing an idea.

I turned to a short story I had release on this very blog to start me off… a nice little premise about space travel through virtual reality being announced by NASA around 150 years in the future, combining citizen science with immersion entertainment to explore the Universe. They called it ‘The Great Connection’. This same story exists now as the Prologue to the novel.

So, that was a nice backdrop, but not a story in itself. Luckily, I had some other ideas, also based on projecting fledgling technologies into the future (which is the bread and butter of many a speculative/science fiction author). Namely about three-parent families, and how, if this was to become an established norm, it would affect the family units of the future.

Add to this my general worries about the rampant rise of consumerism and social division, a little bit of alien world building, and I had my scene set, my characters taking form, and a story map starting to emerge.

From here comes the drafting. The best bit. Usually writing a chapter or major section in one sitting. I couldn’t estimate how long this took specifically, but with other commitments, I know the drafting was at least 6-9 months in real-time. This included a major re-write where ‘Part 2’ of the novel (Lingua Franca) really took shape.

As any writer will know, however, the first draft is just the start. From here there is extensive editing, correcting, tweaking… Probably another 3 months of that before I was able to send it off to get copy-edited (I use a professional copy-editor. As this blog may evidence, sometimes my punctuation can be a little errant!)

And so, I am left with an edited, final manuscript. So what to do with it? Self publish? Send it to agents and publishers? I opted for both. My long term strategy, is anyone is interested, is as follows:

I quite like this formula. You have to be exceptionally lucky to get your manuscript land with the right person at the right time to get representation and a deal. In the meantime, I want to know what people think, what people like (or not) and keep developing. Without feedback, how can I make my next book better?

I approached maybe 50 agents and a handful of publishers. Most didn’t respond. A few said thanks, but no thanks. That’s the way of it. People sent me lots of nice stories about famous authors who were rejected hundreds of times before getting their break. I get it. I’ve always known. That’s not why I do it, but it would be nice, one day, when the time is right.

So, I’m now on step 4, as you can see! There are a lot of sub-steps in those simple words ‘self-publish’ – and even having it released is not the end. Now there is marketing, worry, reviews, and pride too.

But I am also well into Step 1 of the next book. The manuscript for my next novel is at around 40,000 words, and, I’m glad to say, it has a very good map. It won’t be a follow up to this book (I’m going to see how it goes before deciding whether there will be a series of ‘Great Connection’ books. I hope so… I’ve designed it so there can be)… but I can, and will reveal, that the next book is called ‘Transported’. It is a comedy sci-fi (think Douglas Adams / Terry Pratchett in tone, if not in voice) and is also a kind-of sequel to the the titular story in ‘The Dimension Scales’. All being well, I hope this will arrive mid 2017, but we’re having a baby before that date, so we will see!

That’s my potted history of ‘The Great Connection: Worlds in Waiting’. I hope you take the chance to have a little look and, ideally, buy and read it. 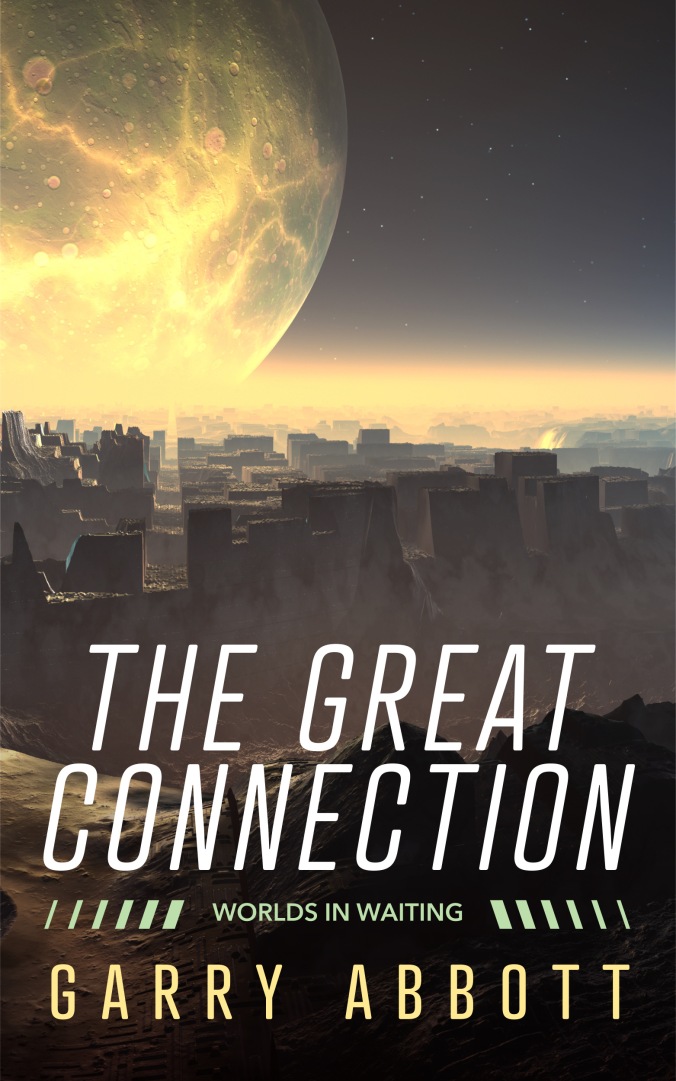