Using my Laughs, tears, cheese and cheers rating system, here is my spoiler-free review for the mostly unnecessary ‘Blair Witch’ (2016) that can’t decide whether it’s a remake or a sequel… 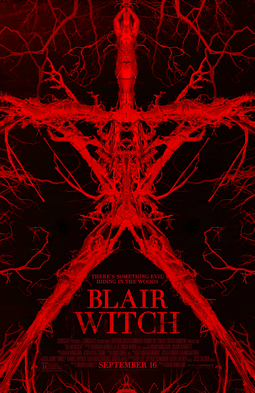 For me, the original ‘The Blair Witch Project’ was a classic and genre defining film. It kick-started the low-budget ‘found footage’ phenomenon for a start, and made up for lack of resources by using the audience’s imagination against them. This latest outing, while a major improvement on the shoddy ‘Book of Shadows’ sequel, makes the mistake of thinking a beat by beat sequel-come-remake with a few extra elements thrown in will recapture the spark that made the original such a classic. It doesn’t. Even though it is a fairly watchable film, it is very unnecessary.

You don’t usually go to the scary woods looking for laughs, which is lucky, because there are none to be found here. We get glimpses of the new group before they set out with some light-hearted moments, but nothing that stands out enough to score.

Am I that cold-hearted that I didn’t care about any of these people? Or is it that I knew too much already about what was coming (given it was so similar to the original in pacing) and therefore the characters felt contrived? The latter, I think.

I’m going to let them off with minus points for cheese. I was tempted because of the whole ‘teenagers go into the woods’ idea, but couldn’t pinpoint one particular example.

Oh dear. Not looking good is it? To be fair, if I was scoring the original, I don’t think there was any moments to cheer for in that either. The opposite, if anything.

Perhaps not surprisingly, the horror that worked for me, like the original, was the dark, torch-lit woods with mysterious sounds and satanic symbols. And there was enough of that to carry me through to the end reasonably entertained. What this film does to ruin all that is go big and obvious in certain places, which didn’t work as well. The original was about ‘less is more’ – here we have ‘more is less’. The finale has a pretty claustrophobic scene that would put the jeebies up most people though.

Bonus Category: -1 Return of the twigs

I think the problem with this film can be summed up in a scene where after the groups wakes up, the twig effigies hanging around the tents are significantly bigger than they had been the night before, as if we are meant to go ‘Oh my God! Look how big those twigs are! This must be bad!’. Simply going bigger while having no innovation doesn’t work when trying to follow in the footsteps of an innovative film. A new angle was needed, and not found here. You won’t be angered watching this film, but you may as well put on the original instead.

Agree / Disagree with my assessment? Leave a comment to let me know or submit your own scores for this or any other film listed in the leader board below to be aggregated into the ‘readers choice’ table on the main rating page.

And if you enjoy my reviews, please like/share this page link, and consider taking a look at my original science fiction books advertised in the side bar! Thanks for reading.