Using my Laughs, tears, cheese and cheers rating system, here is my spoiler-free review of ‘Asterix: The Mansions of the Gods’, with links below if you want to find out more. 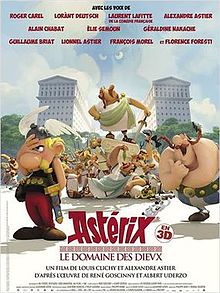 I’ve always loved Asterix since my brother and I used to constantly check them out of our library as kids and go mad for every new animated film release (the Twelve Tasks was our favourite I think). The books always made me titter more than belly laugh, but the films seemed to up the comedy. As an adult watching the first animated version in over ten years (the franchise went live action for a good while), I found this at the same level – generally good fun without big belly laughs. It might be my age, or just that this outing wasn’t as whacky as the surreal ‘Twelve Tasks’ or ‘Cleopatra’ offerings, but it’s not a distraction, if you’re a fan.

It’s heart-warming in places with Obelix’s relationship with the son of a displaced Roman family, but this is no Disney tear-jerker for sure.

It is what it is – a film about invincible Gauls who take magic potion to fend off the Roman Empire. Cheese doesn’t enter into it if you are familiar with the world.

It was daunting at first seeing that this was the first fully 3D animated Asterix feature and worrying it was going to be sub-par. I forget that this is a massive French franchise, so while the movie wasn’t really publicised over here, it has good production values, and some of the comedy potion-fuelled action was rendered well into CG animation, giving great Roman bashing fist pumps along the way…

My heart dropped when I saw ‘starring Jack Whitehall as Asterix’ on the description. I’m not a fan , to be honest. But fair play to the man, he did a good job of the voice acting, and along with the rest of the cast who I am more fond of generally (including Nick Frost, Matt Berry, Catherine Tate , Jim Broadbent and Harry Enfield), they brought the translation to life.

A welcome animated return to the village of indomitable Gauls for fans of the franchise who have spent ten years trying to reconcile Gerard Depardieu as Obelix. I doubt it will convince many adults who aren’t already fans, but kids would probably love it, and its heart is in the right place.

Agree / Disagree with my assessment? Leave a comment to let me know or submit your own scores for this or any other film listed in the leader board below to be aggregated into the upcoming ‘readers choice’ table on the main rating page…