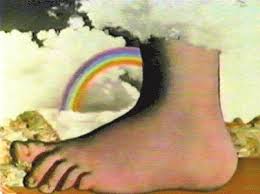 Although I didn’t make the pilgrimage to the O2 arena to watch Monty Python bow out on stage, I was very happy to realise on Sunday that the very last show was being broadcast live on television. Despite the beeped out profanities (thanks to the broadcast going out pre-watershed), it meant that I, and presumably millions of others, got to watch the end of an era.

As far as ‘era’s’ go, it could be argued that it ended some time ago. I remember watching the 30th anniversary evening on BBC2 in 1999. As I recall it was an evening of Python episodes, interviews and documentaries. When the night finished the continuity man announced over the BBC2 logo – “That was the end of Monty Python”, a sentiment the pythons had previously made clear, having contributed only a few snippets of new footage and interviews, and I think, still not really seeing eye to eye on many ideas. (For what felt like many years, Eric Idle seemed to have banished himself to America, only ever appearing in video link ups. I always just guessed it was a tax thing).

This time, however, it felt like a much more fitting way to close the curtain on what has been for them, and us, a cultural phenomenon. It was obvious that they had chosen to come together mutually rather than just responding to expectations because of some arbitrary anniversary. It felt like watching five talented men, happy and thankful for the chance to choose the manner of their own exit, doing it in style.

I don’t really want to review the show in detail here. I think Martin Freeman put it well when in a ‘VIP lounge’ pre-show interview he said that no matter what he thought of the performance, they’ve already done it, they’ve already earned our applause and gratitude. As it happens, I think they more than earned it again with a funny, naughty and well produced finale.

Instead I want to talk more about some other sentiments that were raised by another celebrity fan in the backstage build-up: Harry Shearer, of ‘Spinal Tap’ and ‘Mr Burns from the Simpsons’ fame. He said that although the Pythons didn’t influence his kind of comedy, what they did do was show people that a group of creative people could maintain control over their own output. There is no doubt from the first moment of Python on TV when Graham Chapman says ‘Good Evening’ before sitting on a stool to the sound of a squeal, and then we cut to a drawing of a pig being crossed off a blackboard, that the BBC had taken a risk (see video below). Even more so when you listen to the stilted, baffled titters of the studio audience who don’t quite know what to make of it. Given that it took some time for Python to grow in popularity, it would have been so easy for some number obsessed executive to have deprived the world of their legacy. It hardly bears thinking about.

Of course there would have been some element of creative control over it, but the point, I think, is that they were allowed to experiment and take risks within wide boundaries, even if they were very silly risks. Without risks, culture stagnates. I imagine this is similar to when Paul McCartney was allowed to do a totally acoustic ballad in the form of ‘Yesterday’, a decision that many other producers and managers would have dismissed in favour of ‘more of the same’. Which takes me nicely onto my next point…

Harry Shearer also said that for these reasons, the Pythons and The Beatles are synonymous in his mind. Both groups inspiring his generation and beyond to stick to and stand up for their own creative vision. I agree with this entirely. For someone born in 1981 I was strangely raised on a cultural diet of The Beatles and Monty Python. This came mostly from my older brother. Quite how he discovered it all I don’t really know, as our parents lived outside of the UK for much of the ‘golden age’ of comedy and music. Either way, they were staples in my life, despite having been born not long before these cultural icons had all but disbanded, or been shot. But even from an early age, it was the sheer creativity of both these outfits that interested me. It was the reach of their influence in so many things that followed in our culture that made me excited.

As we get older and discover the world around us, finding out about the architects of our world is (or should be) a profound experience. Comedians and musicians may not have put the bricks and mortar around us, or paved the streets, but they certainly set the tone. Artists of all kind are the interior decorators of the life we are born into. They add to the ‘point’ of it all. Even if you argue that they are only a small part, they are an important and entertaining aspect that we would all miss if it wasn’t there. Unless that is, you want to live in silent, grey boxes, doing nothing ever but working, eating and procreating, never once telling or hearing a story, making something up, whistling a tune, drawing or enjoying a picture, or laughing… ever again.

There are many ways to make an impact on this world, and so many who try end up adding to the problems or creating new ones because their motives are ill founded. Artists give – even if they are sometimes rewarded for it – they create output to (generally) make the world a more enjoyable place and provoke original thought. It is this sentiment and motive embodied in exemplary examples  such as the Pythons and The Beatles that I wanted to try and get at with this blog, and in my little way to say thank you, and goodbye.