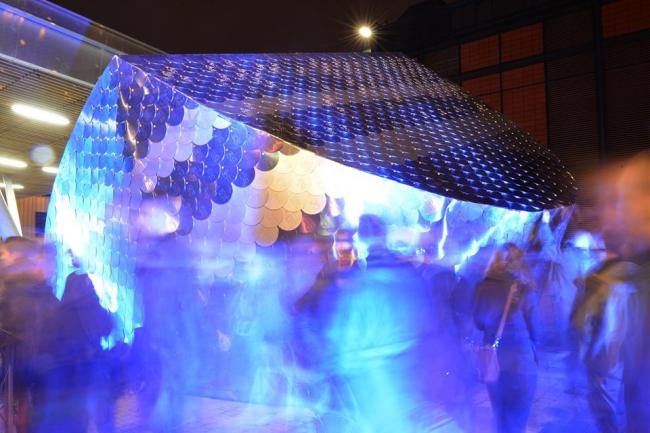 After over a year of design, development, public engagement, challenging fabrication and installation, we were finally treated last Saturday (26/10/2013) to the unveiling of the new ‘Unearthed’ sculpture in Hanley, Stoke on Trent, and as I’m sure you can see by the picture above, it was worth the wait. A big congratulations is in order I think for the conception and realisation of this amazing sculpture by Nicola Winstanley and Sarah Nadin of Dashyline (http://dashyline.wix.com/dashyline).

Without going into all the detail here, the sculpture is a memorial to commemorate the link between the Czech village of Lidice and the miners of North Staffordshire. Most of the population of Lidice were shot dead and the village itself totally destroyed by the Nazi’s in 1942 in retaliation (based on inaccurate intelligence) for an assassination attempt on a high ranking Nazi official. As a result, the MP for Hanley, Sir Barnett Stross, vowed that we would rebuild the village in defiance of this atrocity. The miners of North Staffordshire gave up a day’s pay per week until the end of the war and raised the equivalent of 1 million pounds in today’s money. This was used to rebuild the village and give the few survivors somewhere to live and reclaim. Full details of this story can be found on the Unearthed website here: http://www.unearthed2013.co.uk/.

As part of the sculpture commission, I have been involved in a series of public engagement activities, designed to spread the story and generate pledges to remember the event. Each pledge, captured through the website, is represented on the miners ‘tags’ that clad the whole work, with the initials and day of birth of those who participated – over 3000 people.

Thanks to this project I’ve had the opportunity to write, narrate and score an animated retelling of the tragedy, compose my first choral work for a memorial service, and work with the words of the people who pledged, to produce a spoken word accompaniment to the unveiling ceremony. It has in short, been an eclectic, challenging and artistically rewarding undertaking that I shall never forget.

It has also made me think a lot about the nature of art, history and culture, and how this is perceived and received by various public and constitutional communities. There has unsurprisingly been a few dissenting voices, opposed to the allocation of public money on an artwork, but overwhelmingly there has been support and a depth of understanding with those who have passively and actively engaged with the meaning and vision behind this work.

It strikes me with this project how it almost totally diminishes the notion of pretention due to its visceral link with a real and tragic event that no one can dismiss as being unimportant or worthy of remembrance, even if they may disagree with the specifics of how to do this. I cannot agree with those who feel that no memorial was warranted, that no money should have been spent on this project. If a subject such as this does not deserve an allocation – what does? For an area that suffers from low aspiration and increasingly negative national identity, if we don’t take pride in our past achievements and find contemporary and interesting ways to demonstrate what we are capable of, how are to break that cycle? This project involved hundreds of local artists, fabricators, suppliers and supporting trades. Alongside the worthy story, it is a calling card for the industries of a modern Stoke on Trent that should not wallow in the economic depression that so many towns are suffering and should instead lift its head high and say “think differently about us – look what we can do”. On a purely practical argument, the money that was spent on this project was circular for the area. There were no expensive consultants or unrelated artists flown in from distant counties or countries to reap easy rewards – the funds supported local industries, paying wages, supporting families and raising profiles so that future investors may look more closely at what we have to offer. When you are down, you talk yourself up, you show what you can do. Not the opposite, that leads to a dark and narrow path indeed.

So I am proud of this project, of my involvement in it, and of all the people who support and welcome it. Many times during my work on this I became overwhelmed with the responsibility of the story, the fact that real people suffered and died. I felt for the first time I think, what it means to be connected to our shared history. The people of Lidice stopped being words in a text book, actors in a documentary, and became tears in my eyes, a pain of loss from somewhere inside, greater than I can describe here.

That is why I feel pretention does not come into any aspect of this work, because we could not un-tell or invent what had happened, and each of us knew that while we had a job to do, it would never be more important than the story itself. All we could do is try to tell it in a way we felt appropriate, respectful and engaging, and I think that the Unearthed project has achieved this for our part. I say ‘for our part’ because I am aware of others who long before this sculpture was commissioned, and I imagine for a long time to come, are already dedicated to the spreading of this story.

However, the story ‘belongs’ to no-one but those who experienced it. The way we remember it belongs to us all, and we should be grateful for each and every person who learns of this though any means.

On a final note, if you are reading this and are not aware of the project or the history, please do visit the website (linked again below) and take a look around. Not only will you see films about the various engagement projects and a more detailed history, you can see the links to other ambassadors for this story and use that as reference to delve deeper into the many other individuals, groups and projects that are keeping the story alive. Thank you for reading.